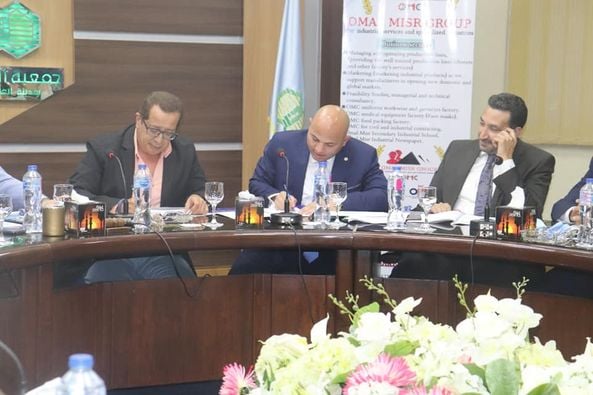 Omal Misr Group signs a cooperation protocol with the 10th of Ramadan Investors Association on supporting investors with workers and opening new markets for industrial products in Africa.
Dr. Gomaa Wanis has written:
To complete the achievements of Omal Misr Group, Consultant Haitham Hussein, the group’s head, signed a cooperation protocol with 10th of Ramadan City Investors Association on supporting and assisting investors and factory owners in the Industrial City of Ramadan.
The head Omal Misr group, and a group of administrators attended the signing ceremony of the protocol, along with Dr. Samir Aref, the president of the association, and Dr. Hala Salah, the general manager of the association, in addition to the honor of attending the signing of the protocol by a group of executive members of the association. And a special honor for the engineer Ashraf, the captain of the 10th workers’ union.
The signing ceremony of the protocol began with a speech by Dr. Samir Aref, then a speech by the advisor of Haitham Hussein. In his speech, he expressed the previous achievements of Omal Misr Group during 11 years in the service of the industrial community and the most important initiatives that the group presented on ground and served the investors and young people in terms of operating factories, increasing productivity, and hiring young people and urging them to work.
Consultant Haitham Hussein directed his speech about the importance of this protocol concluded between Omal Misr Group and the Investors Association in terms of serving investors and factory owners, raising the slogan together for the development of industry in the 10th of Ramadan area.
He also indicated that one of the most important items stipulated in the concluded protocol is the supply of skilled human cadres to factories and the training and rehabilitation of young people before they go to the work environment inside the factories in the 10th of Ramadan City, which will enhance productivity and raise the professional efficiency of workers.
Hussein noted in his speech that Omal Misr team is fully prepared to train workers inside the factories on personal and professional skills, each according to his specialization and industry.
Then the protocol stipulated working to fill the gap experienced by the investors of the 10th of Ramadan, which is the provision of working capital, which will help the investor to increase the production capacity inside his factory.
The protocol also included the marketing of industrial products, by opening new markets for the Egyptian industry in African countries based on the protocols signed by Omal Misr with the competent entities in African countries.
He also pointed out that Omal Misr team has launched large campaigns since the signing of the protocol, nearly 50 employees from the group to inform investors of this protocol to benefit from the services of Omal Misr and the Investors Association, which was mentioned in the terms of that protocol, and to reach each factory door to hand it an envelope that provides the services stipulated in the protocol in order to facilitate the investors, and how to request the service.
In conclusion, the consultant Haitham Hussein expressed his thanks and appreciation to the attendees for the good reception and hospitality at the Investors Association, and then he honored Dr. Samir Aref, President of the Association, and Dr. Hala Salah, Director General of the Association.
And mentioned that soon Omal Misr will contract with all the specialized associations in the various industrial zones in the Arab Republic of Egypt to develop industry, train youth, and increase productivity. 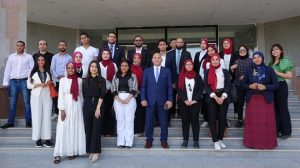