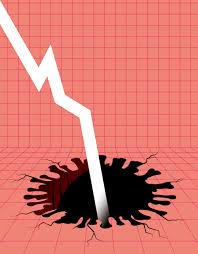 Historical epidemics and pandemics had different economic repercussions based on where they occurred and when they occurred.
The epidemics of the 18th and 19th centuries had minimal financial consequences, owing to the fact that they were localised outbreaks that lasted a few months rather than global pandemics.
The majority of stockholders were affluent enough to relocate, leaving the lower classes to suffer and die.
Furthermore, because each city had its own stock exchange, cross-market arbitrages avoided crashes in epidemic-affected cities.
Globalization, on the other hand, brought with it a new reality: worldwide pandemics.
Travel spread sickness to every corner of the globe, causing investor worry.

Smallpox epidemic in the 1780s

In 1774, a vaccine was developed to immunise people against the disease, with the hope of increasing the average lifespan by three years. France, on the other hand, outlawed smallpox vaccination for fear of thwarting God’s will and exacerbating the outbreak. In the 1700s, the French government would issue a life annuity, which would pay the beneficiary a specified amount of money every year until they died. Investors in Geneva took advantage of these annuities by purchasing them in the names of 30 girls from well-to-do families who were expected to live a long life.

As the disease spread, the country began issuing life annuities with a ten percent interest rate, anticipating a 20-year average lifespan. The bankers agreed to pay for the medical care of the girls for whom they bought life annuities because the Genevan investors wanted 60 years of profits. Only two of the thirty girls died within the first 20 years, and the girls survived an average of 63 years.

Yellow Fever struck Philadelphia, the United States’ capital at the time, in late summer and lingered for several months. Between August 1 and November 9, the virus killed nearly 10% of the city’s 50,000 citizens and forced 20,000 to flee.

The securities market did not crash during the outbreak; instead, it just shut down. Prices of US 6% bonds (Sixes) and Bank of the United States (BUS) shares, two of the country’s most important securities, fell slightly in early August before rebounding and even climbing until quotations for the Philadelphia market were discontinued in early September. Sixes fell from $90 to $88.75 before rising to $91.67, while BUS shares rose from $420 to $412 before soaring to $428. This reflects a “flight to quality” scenario, in which some rich Philadelphians sold real estate and species in exchange for more liquid, transportable, and safe assets.

In 1798, Yellow Fever struck New York, killing 2,100 people out of a population of 35,000 people between July and October. The state had formed the Manhattan Company that year to help the city combat fever epidemics by providing purer water.

However, the company’s charter stipulated that any surplus capital be “used in the purchase of public and private stocks, or in any other [legal] moneyed transactions or operations.” As a result, the corporation began to do more than just provide water.

When the Cholera pandemic arrived in New York in 1832, it killed roughly 3,500 of the city’s 250,000 residents (a mortality rate of more than 100,000 when compared to the present population). As people evacuated the city due to the pandemic, Fives—the most liquid U.S. government bond at the time, yielding 5% interest per year—traded over par throughout the whole summer, ranging from $103.75 to $104.125 (per $100 principal). This was due to the fact that the majority of trades were conducted over-the-counter and through brokers who could conduct business even when they were not in the office.

The shares of private commercial banks including Bank of America, Butchers and Drovers, and Chemical, as well as insurers like New York, Neptune, and Merchants Fire, remained range-bound throughout the summer. Throughout the summer, New York Gas Light traded in a range of $145 to $155.

Railroads, on the other hand, followed a more complicated trend. In late July, Harlem fell from $105 to $95.50 per share before rebounding to $103 by the end of August. The Mohawk and Paterson and Hudson Railroads both fell $15 to $20 per share over the summer and rebounded much more slowly, not returning to their highs of 1832 until April 1833.

Between December 1858 and December 1859, 2,089 persons in Massachusetts died of scarlet fever, the majority of them were 16 years old or younger. Although some of the children were working, with a labour force of almost 450,000 individuals, the epidemic’s effects were more emotional than economic. Those who were sick were quarantined, but the rest of the population went about their business as usual.

Throughout 1859, the Boston stock market was on a roll. The majority of bank and insurance stocks remained range-bound, although some insurers, such as American, Boston, Boylston, City, and Commercial, saw significant gains. In addition, the Boston and Lowell Railroad boosted its share price from $89 to $98 over the year, while the Boston and Providence and Boston and Worcester railroads both increased slightly.

Between 1918 and 1920, the flu killed roughly 40 million people, or 2% of the world’s population. In the United States, about 550,000 people died from the flu, accounting for about half of the population. Because World War I was in its final year in 1918, it was difficult to separate the war’s and pandemic’s economic and financial effects.

The United States had started an economic recession in August 1957 that lasted until April 1958, despite the fact that the pandemic was not mentioned in the media at the time. The Dow Jones Industrials Average reached its all-time high on July 12, 1957, before plummeting 19.4% to a low on October 22.

Health specialists were aware of the impending flu problem when the recession began, but thanks to a manufactured vaccine, officials were able to stay ahead of the virus before it reached the United States. This boosted investor confidence. Before the recession and before the public became aware of the flu crisis, the stock market began to drop.

A autumn conflict between federal officials and Arkansas’s governor over the integration of public schools, as well as escalating Cold War tensions, were better causes for the late October lows.

The SARS outbreak afflicted 8,098 people around the world, killing 774 of them, mostly in China and Hong Kong.

34 While SARS was first discovered in November 2002, it did not begin to disrupt markets until March 2003, when Chinese officials notified the World Health Organization of the outbreak. 5 The S&amp;P 500 had lost 12.8 percent of its value at the time. 6 Furthermore, when compared to its worldwide peers, the MSCI China Index underperformed—though it quickly recovered.

During the SARS outbreak, all 11 S&P 500 sectors fell, with information technology, financials, and communication services decreasing by 14 percent, 16 percent, and 26 percent, respectively. The worst-performing stocks in China were those in the retail, travel, and leisure industries. Pharmaceuticals were the best-performing Chinese domestic industry, up 11% on expected pharmaceutical demand. When the broader market began to recover, three of the five worst-performing sectors, airlines, diversified financial services, and software, rose to the top five.

According to economists, SARS cost the global economy $40 billion and caused a 0.1 percent drop in global GDP.

In West Africa, the Ebola pandemic claimed the lives of 11,310 people in Guinea, Liberia, and Sierra Leone, as well as 15 people outside of these three countries.

7 The S&amp;P 500 index declined 5.9% between December 2013 and February 2014. Airlines, cruise ships, and hotels were among the industries hardest hit by the epidemic. 8 In October 2014, shares of American Airlines and Delta Air Lines both plummeted 20% after word broke that an Ebola patient had flown the day before being diagnosed.

In October 2014, the Cboe Volatility Index (VIX) increased by 90% in a month as extreme market swings became the norm. Other unfavourable news, including as Europe’s economic downturn, an energy price collapse, and new ISIS gains in Iraq, contributed to the volatility.

Despite this, certain stocks enjoyed huge gains at the time. As it worked on an experimental Ebola cure, Tekmira Pharmaceuticals saw its shares rise 200 percent in 2014. In addition, between August and October 2014, the stock price of Lakeland Industries, a manufacturer of hazmat suits, increased by about 300 percent.

The global coronavirus epidemic has had one of the most devastating human and economic repercussions in history. As of December 18, 75.2 million people have been infected with the virus, with 1.67 million deaths reported. Furthermore, the pandemic is anticipated to send most nations into recession in 2020, with global per capita GDP falling for the first time since 1870. 9 According to the World Bank’s baseline prediction, the economy would grow by 5.2 percent this year.

As COVID-19 hit the United States in early March, the VIX skyrocketed, sending markets tumbling. Late in March, markets began a historic bounce and recovery, bringing the VIX back down to pre-pandemic levels—but not to pre-pandemic levels. The VIX spiked again in June (though much lower than in March), then again around the time of the US election.

The S&amp;P 500 index fell 31% in March before rising to reach all-time highs. Travel and leisure, as well as retail, were among the hardest hit industries. Markets had recovered by the end of 2020, with the S&amp;P 500 returning more than 12%. The Nasdaq, which is heavily weighted in technology, has seen returns of more than 40%.