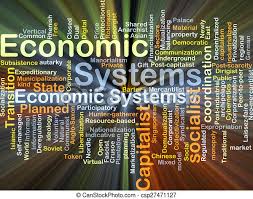 On the other hand, it is due to the close relationship between the economic system and the political system. Every political system has an economic system that suits its people and cultural requirements.
Many types of economic systems have emerged, and we will learn about them together. Follow us:
Capitalism: One of the most important types of economic systems, the capitalist system depends to a large extent on large domestic capital. In countries that follow the capitalist approach, it is characterized by absolute economic freedom. It is designed for maximum profitability, since its purpose is to justify the means. Thus, in this system competition is allowed, even if it is necessary, and can become a form of monopoly completely independent of state institutions, which can function only by protecting them and obtaining the necessary support for them.
Socialist system: It is one of the economic systems, but it is completely different from the capitalist system. It depends on all the state-owned means of production. The most important role is the collective, while the role of the individual is almost marginal. Therefore, the competitive system is very weak. What are the characteristics of economic centralization? And activating the role of state institutions at the expense of the private capital of individuals.
Hybrid system: It is the final product of the economic system and it is an intermediate state between the capitalist system and the socialist system. It is a combination of both systems. It allows capital and state institutions to work hand in hand to build the nation’s economy. It does not ignore the role of the public and private sectors.

characteristics of the economic system
The advantage of the capitalist system is one of the types of economic systems, and one of the most important features of this system is the availability of products that society desperately needs. Because it directly depends on the quantity supplied and demanded. Depending on the principle of competition, always keen to present new offers that allow individuals to freely choose between different products. The economic freedom that the system enjoys makes the system a destination for capital investments, so it provides excellent job opportunities for community members to earn a living.
The disadvantages of the capitalist system Perhaps one of the most important disadvantages of the system is the huge rift that exists between the different classes of society. They are divided into two major classes, very rich class and poor class. In addition to investing in the labor market for children. Monopoly appears when the state ignores strict control over it. Because his main goal is to realize the interests of unscrupulous capital.

characteristics of the economic system:

The advantages of the socialist system, it is considered one of the most important types of economic systems, and one of the most important advantages of this system, everyone knows his rights and duties. Ease of calculating taxes and less complexity in economic transactions. There is no disparity between social classes. Everyone gets their fair share. Respect for the human condition at work. Its most important characteristic is the stability and durability of the work.
Disadvantages of a socialist system Systematic routines cannot be developed quickly, and decision-making about the most important disadvantages is slow. In addition to the lack of profit, there is the dominance of political power and its control over the enactment of laws and regulations. But there are persistent fears of losing some natural resources and being significantly affected by the climate. And finally, massive unemployment and a lack of job opportunities.
The advantage of the mixed system does not lie in the system itself, but in the mixture of economic systems that emerged to solve the defects of the capitalist system and the socialist system. It allows competition and allows capital to be invested properly in the society. But instead of ignoring the role of the public sector, it reinforces the control of the state and the role of the relevant authorities over the investors. This ensures that the wheel of development goes ahead and keeps pace with the requirements of the economic market. It should be noted that this system has been adopted by many developed countries. Because of its many advantages and advantages and its essential role in social development. In conclusion, after defining economic systems, and what we know about their most important types, advantages and disadvantages, we can say that in the end there is no comprehensive system. Because each system has advantages that distinguish it from other systems. and the adverse effects it will incur. Therefore, countries are working hard to improve their economic systems. Because the wheel of progress and development determines that.