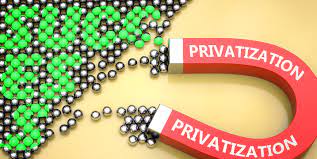 privatization concept
The concept of privatization refers to the process of transferring services or property from the public or government sector to the private sector, so that in this process all assets owned or owned by the state are sold to public sector bodies through the abolition of laws and all restrictions imposed by competition between private companies, this procedure usually What has a noticeable impact on government revenues, which may be beneficial to them, ie positive, and the concept of privatization itself can differ. Much of it relates to the concept of nationalization, as nationalization is one of the policies adopted by the government to retain revenue, and this policy is widely used by the government under the control and control of foreign interests in its economy in an attempt to achieve a way to protect revenue from vital industries.