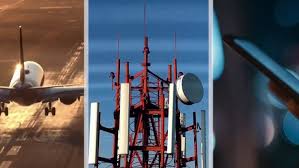 The 10 largest US airlines have warned that the operation of 5G mobile networks, expected to be operational on Wednesday, will cause a “significant disruption” to their flights.

Operating the service would result in a “completely avoidable economic catastrophe”, the companies said, and airlines are concerned that signals from 5G networks, which use the “C” radio wave spectrum, could interfere with frequency waves used in air navigation equipment. Especially in bad weather.

This is a joint message from the companies to the FAA, “We urgently need urgent intervention to avoid operational disruptions that could affect travelers, transportation chains, and the supply of medicines and medical products, including vaccines.”

The BBC saw that the letter was addressed to a number of officials, including Transport Secretary Pete Battigieg and the head of the Federal Aviation Administration.

The BBC has learned that negotiations are currently underway at the highest levels of the US government over what it calls a “extremely complex situation”. Airport runways that will be affected under control procedures issued by the Federal Aviation Administration. Prior to the launch of the service on Wednesday.

“We call on the FAA to locate towers for 5G networks near airports and runways and need to move them further to ensure passenger safety and avoid disrupting flights,” the letter read.

In a rare joint statement, Airbus and Boeing warned of network risks to flights a few weeks ago.

“The aircraft manufacturer has informed us that the majority of the company’s existing aircraft fleet may be out of service,” the 10 companies said in the letter.

“In addition to the chaos at the local level, the lack of aircraft could affect flights and keep tens of thousands of Americans stranded in countries around the world,” she continued.

In the United States, the Federal Aviation Administration, which oversees aviation safety and air transportation, announced that “approximately 45 percent of the US commercial transportation fleet will have to land on runways at nearby airports in case of poor visibility. To a fifth-generation Internet tower.”

The authority added that it allowed the installation of “two wireless network communication devices on some Boeing and Airbus aircraft to determine the altitude, although some flights at some airports may be affected.”

The authorities said they would be in contact with the plane’s manufacturer to understand how the altimeter and location device would work during the flight, and how to avoid being affected by 5G networks, which feature higher speeds and wider connectivity.

The start of the 5G network was postponed from late last year to the beginning of this month, then to Wednesday, and perhaps again, due to concerns raised by the airlines.

The Wireless Trade Association of America – better known as CTIA – has said 5G networks are secure, accusing the airline industry of raising fears and distorting the truth.